Nostalgic eats to keep you rocksteady

I like avocado toast and matcha lattes as much as the next greedy food enthusiast, and I do genuinely find food trends exciting, but sometimes I just want things to stay THE SAME. I feel bereft when traditional restaurants and caffs which had been doing great things for years change hands and get their soul ripped out of them in favour of distressed crate furniture, bare filament lightbulbs and raw cacao chia ‘nourish’ bowls. The start of 2017 has felt a little hazy for me, and so it’s places that evoke great nostalgia and heritage that give me the most comfort. Unfussy, down-to-earth venues where customers are a mix of old faithfuls and new faces, where there are cushions, carpets and comfy booths and the menu hasn’t changed in years because it doesn’t need to.  Here’s a round-up of three brilliant places where you could almost convince yourself that time had stood still…heck, two out of the three don’t even have a website – how refreshing! And if you have the energy to read to the very bottom, I have written something about George Michael… 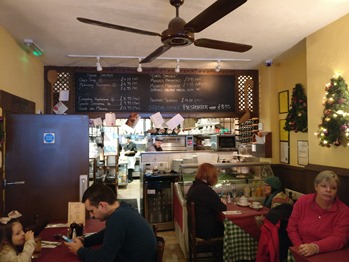 Aaaah. And relax. Look around you. Apart from the bloke tapping on his smartphone, this could be 1985 – which is when the restaurant opened. It has stood the test of time and remained steadfast amid the flurry of restaurants that come and go in Crystal Palace – some appear, then disappear just months later, and competition is fierce. But Lorenzo’s have been getting it right for years. The menu has reassuringly sturdy ‘Brit-alian’ comfort food that I have turned to many times when I need some extra fuel in the tank – spaghetti, pizza, hefty garlic bread, pollo alla Milanese and tiramisu. The portions are generous, filling and tasty. It’s not showy, and to my tastes some dishes could use a little extra spice and herbs, but I would come here again and again as it’s really great, and such good value. It’s always packed to the rafters, and it’s easy to see why. The staff are unfailingly cheery and really go the extra mile to make you feel welcome, especially if you turn up with kids – which is no mean feat, especially since dining out with our five and two-year-olds is a dangerous, risky expedition which usually results in food and crockery getting hurled, plus a healthy amount of flouncing and screaming, and one of us leaving after 43 minutes with the youngest before he turns into the Exorcist.

Fill your boots, go on:

Super busy, even on a mid-week lunchtime!

I once went to try this Eritrean restaurant about – uh – 15 years ago with my boyfriend when he lived in Brixton and, incredibly, have been trying to return with him ever bloody since! That’s the problem sometimes; Brixton has become such a dining mecca with so much choice. BUT – Asmara really stands out, and it has stayed just as amazing as I remember it. East African food is really different – it’s a mixture of highly spiced stews which are served on a communal ‘injera’ buckwheat pancake draped over a small wicker table, with no cutlery supplied. Indeed, our friendly waitress sensed we needed a bit of encouragement at the start of the meal, rolled up a bit of stew in the pancake and then asked me to open my mouth whereupon she fed me! We ordered the mixed vegetarian feast and it was sensational. Rich spicy gravies and pulses, stewed spinach and vegetables with aromatic spices and delicious tangy pancake to wrap it all up in. There are no desserts, which to be honest you don’t need as the mains are so filling, but you get coffee and buttery popcorn offered to you at the end of your meal, while frankincense crystals waft from a burner – unforgettable! Had I not been going to a gig afterwards I would have scooped up all the leftovers to take home in a doggy bag, everything was so good. One thing to note: Asmara is one of the very few places to eat in Brixton that takes bookings, which is such a flamin’ relief when you can’t be arsed to queue and have paid for a babysitter.

It doesn’t look like much from the outside, but trust me, Nirvana is within! 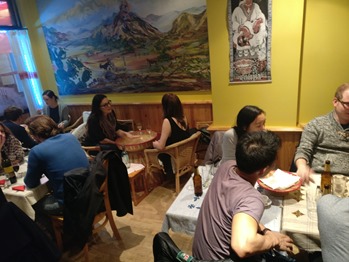 The injera pancakes making a plate for all the fragrant stews:

And now for the coffee ceremony – frankincense wafts while you pour away: 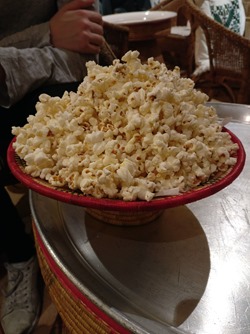 Love the colourful decor, which, unless I’m mistaken, is just as I remember it 15 years ago: 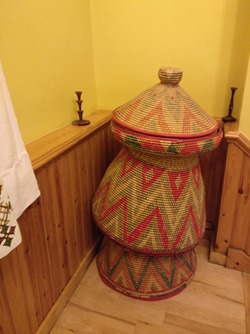 What’s this? A Greek Cypriot-run greasy spoon that hasn’t changed in decades? How come I hadn’t ever been here before? I feel like a bit of a dick, having passed this place on the bus approximately 40,000 times in the 16 years that I’ve lived in the area. This little legend of a cafe has been here since 1932!!! And the same family have been running it for 40 years; you can really taste the love and care in the cooking. They offer hearty fry-ups, pies, American-style breakfasts, delicious puds – and it’s all good home cookin’ with a slight Mediterranean twist. I even managed to get a lovely cup of Earl Grey, as the friendly owner has a stash of great teas. The interior looks like it hasn’t changed in decades, filled with wonderful old formica tables, pastel linoleum and wooden chairs. Nothing is pretentious and there is a real sense of calm and refuge here. And oh boy, they make an incredible coconut cake served with lashings of custard. There shall be many more visits here, I tell thee. 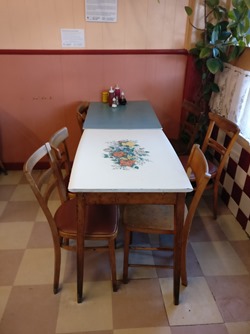 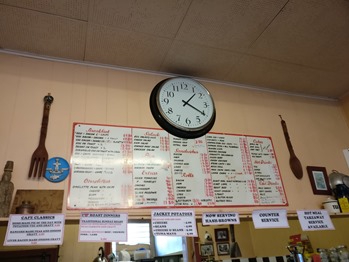 Where the magic happens: 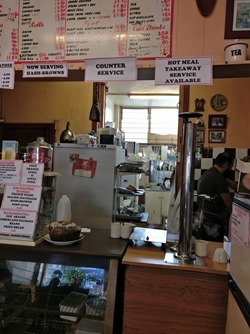 Superb veggie breakfast made amazing by the addition of grilled halloumi and a homemade serving of bubble ‘n squeak. The fried egg was peerless, cooked just right – no uncooked egg white in sight (my bugbear)!

Woah there. This was my friend A’s American breakfast – French toast, thick bacon, sausages and a hash brown: 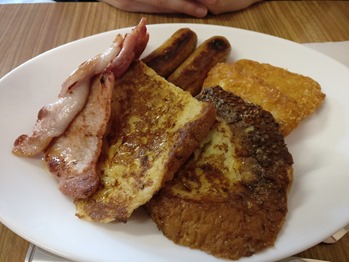 Behold: the majestic coconut cake atop the counter – how could anyone resist? 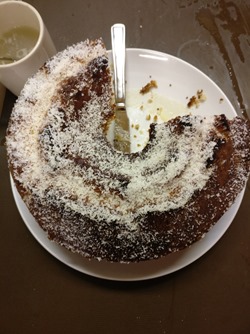 Frankly, this is my IDEAL amount of custard. As in, the pudding must have masses and masses of it. It mustn’t run out before the cake, which would be a sin. The cake was moist and delicious OOOOOOOF:

Endnote: IF YOU ARE A FAN OF GEORGE MICHAEL, READ ON. IF NOT, GO AND PAT A DOG OR SOMETHING!

This might seem like a tenuous link, but George Michael was a Greek Cypriot. I needed to write about his death somewhere, so here it is. I thought that George had such trailblazing talent. His voice simultaneously gave me the shivers and made me feel uplifted. I am so absolutely gutted about his death – I’ve been having little private daily cries since Christmas Day 2016. Which seems strange – I never met him in real life. But he had a monumental impact on me. As sad, lonely pop-obsessed teen, his music got me out of a big hole during my bleak adolescence. And it has carried on ever since. George seemed like such a top bloke – he owned Labrador dogs, for Pete’s sake, which in my book is the true mark of a good soul. Wham! ignited my fervour for pop music, which has never died. I have now forgiven the Wham! fan club for never sending me my membership pack (which I paid for with an £8 postal order) when George, Andrew, Pepsie and Shirlie broke up in 1986. I tried – and failed – many times to get to a live show. I am too sad to write about this eloquently, and can’t believe he is actually gone, but ‘Ladies and Gentlemen’, ‘Fantastic’ and ‘Make it Big’ (and so on) are almost worn out from repeated listening over the years. So, George, thank you especially for providing ‘Club Tropicana’ – it was my requested track to get the dancefloor going at my wedding, and I always stick it on whenever I get a chance absolutely anywhere. Here’s George, Andrew and the gang doing what they did best – having LE BIG FUN with permatans, cocktails and day-glo smiles in Ibiza! Mine’s a daiquiri in a swimming pool, for the record.

There was an error retrieving images from Instagram. An attempt will be remade in a few minutes.