According to my daughter, I am shit at baking birthday cakes. Actually, ANY cake for that matter. It doesn’t matter whether it looks like Elsa from Frozen or has rogue vegetables blended in – she summarily rejects ALL of them. They are either ‘too brown’. Or ‘too chocolatey’. Or ‘not yellow enough’. The list of complaints is endless, and all my second-guessing leads me nowhere. A recent cake offering, which I thought would tick all the boxes, was vanilla cupcakes decorated with pink icing and pearl sprinkles. She deemed the icing ‘disgusting’ and so in order for her to endure the sponge, I had to slice the tops off each cupcake and prise the sprinkles off individually and serve them NOT TOUCHING EACH OTHER on a plate. Sigh.

For her big birthday cake this year, it was more stressful trying to think of something that would pass her steely criteria than it would be to re-sit my ‘A’ levels. So I thought I would go down the fake and colourful route – make a cake that was pink on the inside and covered in luminous candy sprinkles. Nuclear day-glo in strength. The cake decorations were the easy part – I bought terrifyingly bright hundreds and thousands off Ebay (the faded ‘natural’ ones in the supermarket held no allure) and so gaudy were they that when I prised open the box I was temporarily blinded. The label on them even dared to classify them as officially ‘edible’. So far, so good. I purchased fistfuls of bright heart-shaped lollipops to stick on the top of the cake to complete the dazzling colourfest. Again, a success – nice and bright, none of these apologetic pastel shades you get from vegetable dyes.

BUT. Forget all about buying Sainsbury’s red food colouring. It is totally crap, turning the cake mix a drab brown colour of fading roses. Thank GOD the recipe I used called for pureed strawberries in the mix, because without those I would have had a greyish slab of a cake. I should have planned more in advance, realising that the only food colouring worth its salt has to come with terrifying behaviour-disrupting E numbers, banished from supermarket shelves and only found at serious cake decorating enclaves such as Lakeland, or ordered from the United States. I’m talking luminous, mind-shattering reds, blues and yellows that contain the same E numbers that I ate in the 70s as a child, or drank in fizzy drinks while backpacking in SE Africa in my 20’s, where the effect of drinking a bottle of Fanta was like taking hard drugs.

I found a recipe for a ‘Pink Lady Cake’ from Smitten Kitchen. I can’t say I was overwhelmed by the texture of the cake, which was a little dense. But it had a nice flavour, reminiscent of strawberry milkshakes, thanks to pureed strawberries in the mixture. As discussed before, it should have been pinker. Next time, I’m buying weapons-grade food colouring via the internet and will hunt down a fluffier cake recipe. 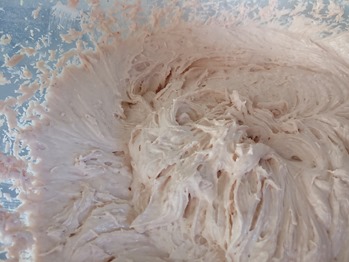 The frosted cake, about to get rather camp: 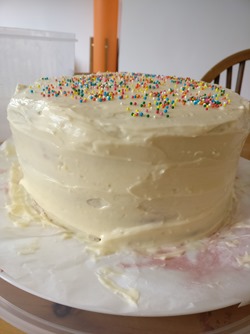 Oh – the actual verdict from my daughter, Chairman Mao? Lollipops: yes. Sprinkles: pass. Frosting: yuk. Cake inside: NO. But…the mere act of handing out lurid lollipops to every child at the party after the candles had been blown out made me feel like a ROCKSTAR. Sorry parents!

I like to think she enjoyed the idea of the cake for at least 30 seconds, before the crushing disappointment of actually tasting it. Love you, little E: 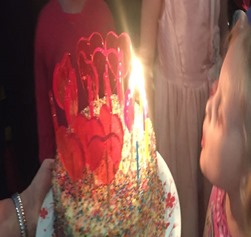 There are some amazing mangoes around at the moment - I got some Indian and Brazilian ones from a grocery store in Camberwell and experimented making an ice cream version of the Thai dessert classic mango and sticky rice - it's a work in progress...🍦