In the beginning of my journey into Parenthood, I tried to keep Disney cartoons out of my daughter’s life. I had all these lofty ideals that she wasn’t going to get sucked in by the big commercial things, driven by this vague notion that it was just too inane. What the hell did I know? Fuck all, it turns out. At age four our daughter has very definite ideas about what she likes – which are, of course, exactly the things we tried to avoid in the beginning. Let’s not even go into all those ‘tasteful’ wooden toys I tried to force her to like. She is mainly obsessed with princesses, ponies, castles, pink everything, plastic tat and the movie ‘Frozen’. Good for her. All of these things combined make her deranged with happiness, and to this I say bring it on!  So what if it’s all massively gender stereotyped? I tried dressing her as a boy for the first two years of her life AND NOW LOOK. Most of her favourite outfits are so camp, though, they make her look like a tiny Grayson Perry. Ha!

There she is, the midget Queen Elsa:

When her ladyship said she wanted a Frozen cake for her birthday, I scoured the internet for pictures of what other people made their Frozen cakes look like. Some of the designs were uber elaborate or freakishly kitsch, and as I don’t have a particular skill in making cakes look complicated I thought I’d do something that I could handle and not have a massive nervous freak-out like I did last year, when I made a huge dinosaur cake that nearly broke my spirit.

The first thing I decided on was that the cake would be no way as big as the dinosaur cake – we had so many leftovers clogging up our freezer afterwards that mostly ended up in the bin, which made me weep a little. No, this cake would be half the size, and still a decent size at that. One large chocolate sponge for the base and a smaller one on top. I also decided that I wasn’t going to spend money on getting silly cake topper accessories, at £10 per Anna or Elsa. Instead I scooped up Erin’s plastic Frozen figures off her bedroom floor, gave them a rinse and they went on the cake with a few bits of edible glitter and whatnot. She was none the wiser.

The best thing I did to make things easier was to buy ready-made white icing in a block that you just roll out. It goes on like a dream, is nice and smooth, and you can pimp it up with food colouring, edible glitter and whatever else you have around. And if, like me, you hate eating icing and will peel it off, there’s no point making this bit by hand.

The other thing I would recommend, if you have the time, is to make the whole thing in stages on different days, starting about five days before the birthday party. It took me two hours to make the sponges. So I did that on a Monday night, then cling-wrapped them and put them in the fridge. Making the chocolate filling for the sponge, then covering the sponge in white-ready-roll icing took another two hours. So I did that on a Wednesday night. Decorating the iced cake with figures, glitter, blue ‘ice’ shards and snowballs took another two hours, so I did that the evening before the party. Pacing it out this way made sure I didn’t tear out all my hair or go totally deranged. There was a minimum of swearing this time – here’s what I came up with:

The mistake I did make, though, was filling the cake with a dark chocolate ganache made with melted butter and dark chocolate. Because I had to hide the cake in the fridge, the filling set absolutely rock solid and when the moment came for me to cut the first slice, with all the children’s eyes on me in anticipation, it took me frigging ages to saw through it! I would opt for a creamier chocolate filling that doesn’t go solid, so have suggested this below. Make sure you let your cake come back up to room temperature before you serve it – the flavours won’t be dulled by the fridge chill.

Final bit of advice – before you embark on any of the stages, have a massive strong coffee. Make sure any children you have are either unconscious or restrained somewhere. Put some loud music on and get going. It’s amazing how much you can get done when you’re bleeding caffeine out of your eyes!

I used Annie Bell’s ‘Chocolate Sensation’ recipe and doubled it.

Preheat the oven to 170C and line your cake tins with greaseproof paper. I used a 24cm one for the base and a 20cm one for the upper level.

Cream the butter and sugar in a food processor for 3 – 4 minutes until really light and fluffy. Add the eggs, one at a time, scraping down the sides of the bowl between each addition. Now add the flour in three goes, alternating with the buttermilk, beginning and ending with flour. Add the salt, vanilla extract and cocoa. Mix the vinegar and the bicarb of soda together (it will fizz), and add to the batter. Divide the mixture between both tins. The smaller tin takes 50 minutes to bake, and the larger one takes about 1 hour. Prick the cake with a metal skewer and make sure it comes out clean – if any mixture clings to it, put the cake back in for another few minutes.

Leave cakes to cool for 10 minutes then turn them onto a wire rack, then remove the paper and cool the right way up. If the top of either of your cakes is a bit ‘domed’ (like my cake below on the right) carefully shave a thin top slice off with a sharp knife to make it nice and flat. Save that bit as a snack to have with some of the cake filling.

To make the chocolate cream filling, melt the chocolate in a bowl and set over a pan with a little simmering water in it. Beat it into the sour cream, cover and chill for 2 hours. Then half your sponges across the middle and spread the filling inside. 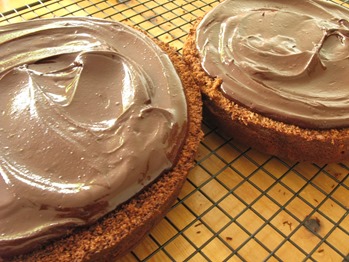 This is a step-by-step summary of how I pimped my cake up to become an edible snow-fest. The most crucial ingredient here is isomalt – this is a sugary coloured substance that you melt to make the blue ice shards. It’s really easy to use, and is a great way to make your cake look fantastic. It has a wierd smell of toffee apples when it melts, but is apparently entirely edible!

1. Cover the cake board in four strips of greaseproof paper which will keep the base clean while you decorate the cake. Using a pastry brush, spread a blob of apricot jam in the centre. Place the larger of the two filled sponges on it, it will stop the cake sliding around.

2. Using a pastry brush, cover the top and sides of the larger sponge.

3. Dust the surface of the table with icing sugar, divide your icing block into a large lump and a slightly smaller one (large one for bottom cake, small one for top cake). Roll out your larger lump of icing:

4. Using the rolling pin to carry the icing sheet, drape it over the cake and smooth on with your hands. Pinch together any loose bits of icing. As I’m not a professional cake maker, I have no idea how to make these folds ‘disappear’ but fear not – all the decoration going on top will hide it.

5. Place 4 strips of greaseproof paper on top of the iced cake, then paint apricot jam in the centre again.

6. Place the top filled sponge onto the centre of the larger cake, and then roll out your second lump of icing and drape it over the top cake in the same way you did before. You can now pull out the greaseproof paper from the centre (but keep the other bits in place on the cake board):

7. Now slightly moisten the cake with a damp piece of kitchen towel, then use a pastry brush to paint it all over with edible blue lustre powder:

8. Make some snowballs – pipe a bit of blue food colouring onto some leftover icing and roll it into a sausage, then into balls. You’ll need about 15 balls approx:

9. Now to make the blue ‘ice shards’. Take your packet of isomalt, put it in a pyrex jug and microwave it according to the packet instructions until melted and bubbling. Carefully pour onto a sheet of greaseproof paper on a heatproof surface and wait for it to cool. Then break it with your fingers into shards. Keep the large pieces and the small ones too, you’ll use all of them:

10: Take a snowball and place it on the base of the cake – then press one of the larger ice shards into it. Continue all the way around the cake. For the middle tier, you won’t need snowballs, just press the shards into the icing: 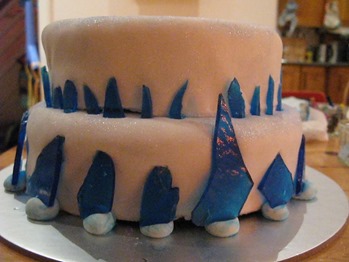 11: Press the little ice shards onto the top of the cake: 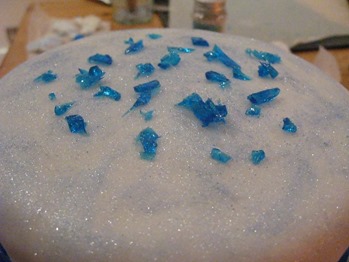 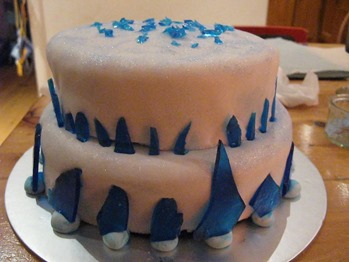 12: Pimp the cake up a little more by adding sugar balls wherever you like – I put them around the middle tier and also on the top of the cake:

13: All you need now are your Frozen figures – fetch Anna, Elsa, Kristoff and whoever else you can fit on there and sink them into the icing.

14. Now pour yourself a massive drink. You deserve a bottle of wine!

← Cyprus: amazing food on both sides of the line
Bao, London →