One night in Peckham 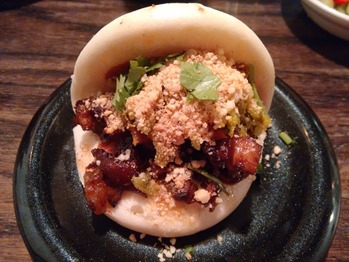 I do love a visit to Peckham, even though these days it appears to have more in common with Notting Hill, what with property prices smashing through the roof. I should know, I tried to buy a house here five years ago, and bid a hasty retreat! In Peckham Rye there are now boutiques selling very beautiful, expensive tins of tuna for £11 and spools of waxed gardening twine in varied shades for a king’s ransom. However, alongside these familiar hallmarks of gentrification, there are loads of amazing good value places to go out and eat and drink the night away in interesting and urban surroundings around the Bussey Building and along Rye Lane. The area hasn’t lost its edge yet – it still retains its diverse mix of shops and services. Carpet shops, jewellery boutiques and phone shop kiosks rub shoulders with global grocery stores selling spices, plastic buckets, mangoes and chicken feet. The air thrums with spicy aromas and thumping music.

The following suggestions are just a taster – there’s only so much you can fit into one night out when you have a babysitter on the clock!

Start off with some nice cocktails or ales at The Nines, a bar housed bang slap next to the Bussey Building, a warehouse filled with music and art spaces. Sip a fiery Tom Collins while you smirk at the very trendy gym opposite, where men and women lift weights in a serious manner wearing ‘directional’ gear in view of the bar:

Right next door there is Oi Spaghetti: the cutest little shed serving nothing but pasta and tiramisu. Bless its heart! 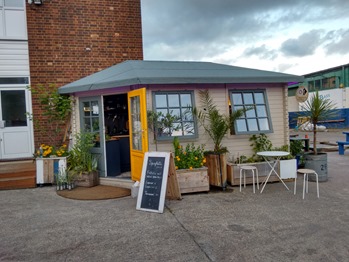 Rather liked this spooky mural, gazing up to ‘Ron’s’ chimney: 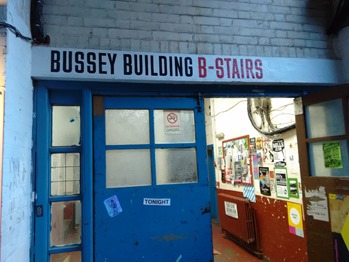 Mural on the way out from the Bussey Building:

Next, we went for some drinks at the brilliant Four Quarters bar on Rye Lane, which is crammed full of old arcade games. Space Invaders! Asteroids! Streetfighter II! Such fun: 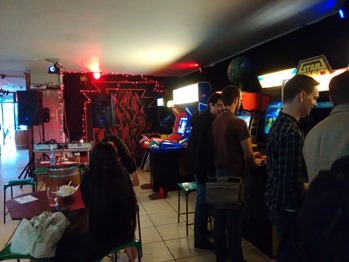 Swap your pound coins for US quarters to make the games work. Asteroids is one of the hardest games out there, I think!

Love these table top games. Make me feel all nostalgic for days of yore:

Now, for the food. Eating out in Peckham is only a challenge because there are so many options to choose from. The places on our list were Hong Kong noodles served in a portacabin next to the Bussey Building at Bosslady, Taiwanese at Mr Bao on Rye Lane or Vietnamese at Banh Banh on Peckham Rye.

Mr Bao was where we ended up, hungry for some Taiwanese street food. Everything was really, really good. They do those cute, fluffy Taiwanese milk buns stuffed with tempting fillings, as well as sides of crispy fried chicken, sweet potato fries, pork dumplings, salads, pickles and steamed veggies. Everything was delicious, but I think you only really need to know about this, the slow braised pork bao:

The one thought we all had earlier in the evening while we drank at The Nines bar was that it’s only a matter of time before the developers succeed in moving in and turning The Bussey Building into luxury flats, paving the way for the likes of Wahaca and Leon to open their brands of ‘urban cool dining’ in the spaces now occupied by the independents. There has already been a massive campaign to save the Bussey from this very threat, and local residents have been violently opposed. Let’s just hope they can fend off the developers a while longer, otherwise yet ANOTHER characterful part of London will be rebranded to look exactly like everywhere else. SPITALFIELDS for example. That whole redevelopment ripped out its soul and broke my heart – after 10 minutes there I feel really gloomy. For now, let’s enjoy Peckham while it’s interesting and diverse – I cannae wait to go back…