Public announcement: these are not called Paradise Bars for nothing. They are like a Bounty Bar with added HORN. My wonderful friend N made a tin of these for my birthday earlier this year (YOO HOO my dear!) and I think it was one of the best gifts I have EVER received. Paradise Bars are creamy, chilled slabs of buttery coconut covered in thick, dark chocolate. You keep them in the fridge so that they remain cool and delicious and don’t melt. The snap of the chocolate as you bite into one outdoes anything that a Magnum ice cream can do, and the coconut has a touch of salt added to its sweetness. Oh. My. Lawd. N’s gift (24 in the box) got hoovered up shamelessly over the course of two consecutive evenings, and they’re pretty rich. So so so so so delicious.

Guess what, though? You can feel smug when you eat them because they contain all good things. The chocolate I used here is 70% cocoa, and there’s no refined sugar in the filling, which is just desiccated coconut, coconut oil, coconut cream and maple syrup. Coconut is like a wonder-food, as far as I’m concerned. The recipe is adapted from the glamorous Hemsley and Hemsley sisters’ book, ‘The Art of Eating Well’. These two sylph-like maidens make sugar-grain-and-gluten-free eating look trendy and Instagrammable, while they themselves look hot, beautiful and poised at all times. I want their wardrobes. Sigh. Anyway, back on Earth, we mere mortals can suffice with some of the Hemsley magic in our lives…

First place the unopened pack of coconut cream in its plastic wrapper in a bowl of hot water to soften it up. When it’s softened all the way through, snip the pack open and pour it into a mixing bowl, then quickly add the coconut oil, dessicated coconut, maple syrup, vanilla and salt and mix until it’s like a fudgey dough. Line a tin with greaseproof paper and pour the mix in, patting it flat with your hands. Put it in the fridge for 15 mins while you melt the chocolate, to firm it up for cutting.

Then get your chilled coconut slab out of the fridge, turn it out onto a board and cut in half, half again, then keep going until you have 24 pieces.

When the chocolate is cool, but not solidifying again, use two forks to hold each chilled coconut piece as you dip it into the melted chocolate. Place each chocolaty nugget back into the greaseproof lined tin to solidify. This is a messy job, don’t worry if your chocolate splurges everywhere in the tin. (You’ll just have to break the paradise pieces apart to separate them later, no biggie). Then back into the fridge to solidify. They’ll keep (if you can keep your paws off) in a sealed tin in the fridge for a month or for longer in the freezer. I don’t know why I bothered to tell you that last bit, because 48 hours is the longest they have ever lived in my house! 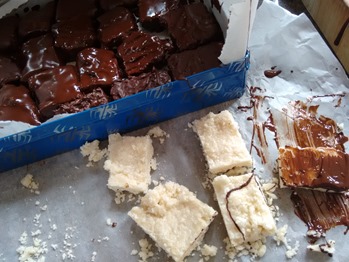 The Greeks do a doorway very well