When my friend P invited me to stay for a few days in his holiday rental cottage in Whitby, a North Yorkshire seaside town famous for its fish ‘n chips, I jumped at the chance. Bram Stoker set part of his ‘Dracula’ novel here. The town is flanked by an imposing ruined Gothic abbey on a clifftop. And seeing that my friend P and I had travelled to Romania together about 15 years ago to explore the ‘Dracula Trail’ in Transylvania, I thought it very fitting that we should continue our adventures. What I didn’t realise, never having been to Yorkshire before (shame on me!) is that Whitby is one of the hardest places to travel to inland in the UK – just over six hours from London and four changes on the train. It would be quicker to travel to Belgium! No matter – I was ecstatic to have a chance to devour a book undisturbed and just stare out of the window, continuously eating sandwiches. The view of the Yorkshire Moors from the train window was stunning.

P’s rental cottage was situated in the centre of town above a shop that sold knitted animals and tea cosies. It was mostly comfy (apart from the lack of bedding for the sofa bed, which meant that I slept wrapped in my coat – d’uh!) but upon reading the visitor’s book you’d have thought people had been forced to stay in a Russian gulag. Honestly, the passive aggressive moaning that went on had us in fits of laughter. You’d think people might save their whinges on a separate bit of paper and pass it to the caretaker, but no, they wanted it recorded for time evermore for others to see – for example:

“Fridge/freezer needs attention” – John and Lesley
“The bleep downstairs needs sorting out” – Gary and Janine
“Just a shame the shower didn’t work” – Kathryn and Jo
“Second time in cottage, lovely time, toilet seat still broken” – Stephen and Lesley
“We had to invest in a potatoe (sic) peeler and scourer” – Jen and Jim Blackburn and Gonzo the dog from Lancs
“The toilet was leaking from the OUTPUT pipe. There are no lids for any of the pots and pans – even the steamer set!” – Sharon and Scout the Airedale

And my personal fave was this one because at least it was cheery:
“Flat was great, good position especially. No wifi but weren’t in (sic) much. Dead easy to stagger back to. Toilet seat tries to eat you.” – Antony and Korry from Leeds

Ha! Anyway. Whitby is a charming and quirky place. It is a collection of pretty seaside cottages and narrow, steep streets flanking a harbour, with the formidable Whitby Abbey rising above everything from its clifftop. Goths have proper festivals at the abbey several times a year. You can buy trinkets made of jet, a local black stone made from fossilised monkey puzzle tree wood. There are donkeys for hire for kids to ride on the beach. There is a brilliant museum where you can see steampunk ornaments from the Victorian era and taxidermised animals. There are tearooms and bookshops, and, bar a branch of the Co-op, NO CHAIN SHOPS. We visited a black magic accessories shop that sold spells, tarot readings, weird jewellery and had a coffin parked in the corner. As my friend P so aptly put it, ‘IT’S A HIPSTER FREE ZONE’. Nothing trendy going on whatsoever – the local market hall sells balls of wool for knitting, with sturdy cardigans on display.

Here are some food-themed photos from my stay:

Now, THIS – an amazing tearoom themed on the Sherlock Holmes stories:

I could lose hours in Sherlock’s; it’s like going back in time:

Below is Whitby’s butter market where you can buy local produce from stalls under the pillars. I picked up a chilli sauce called ‘Goth Bomb’ from a hairy biker and a jar of local borage honey. You can have a slab of cake at the outdoor cafe staffed by really moody waitresses:

We ate at ‘Mister Chips’ every night – the food was brilliant. Unpretentious, very friendly and welcoming: 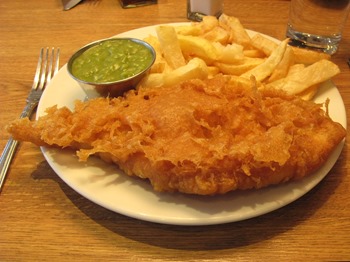 Mister Chips does a delicious Yorkshire Curd Tart (like a custard tart flavoured with citrus peel, with a caramelised sugar crust) and a cream cheese ice cream: