When I moved to Crystal Palace in SE London 12 years ago, it was a bit of a desert for anyone that likes to eat and drink nice things. Although there were lots of takeaways and restaurants, many were depressingly average. The middle class foodie’s best bet for a drink out, amid a motley selection of hugely unfriendly pubs, was to go to a humdrum branch of O’Neill’s Irish chain pub. You felt fortunate if you could get a glass of red or white wine – just imagine! But it was a small price to pay for not being death-stared out of the other pubs, amid total silence while a tumbleweed rumbled past. The best food – and, hurrah, still going strong today – was to be had at Domali veggie cafe and Joanna’s brasserie.

How times have changed – you would barely recognise Crystal Palace now. It has a generous sprinkling of pubs that have had a significant makeover – to name a few: O’Neill’s changed into the super friendly White Hart about 9 years ago, the massively vibey Hollybush pub is unrecognisable as The Sparrowhawk, and The Blue Bottle Pub no longer has a ‘no caps, no trainers’ sign outside, reincarnated as the friendly and bohemian Westow House. You can now sup a pint without fear of being heckled as a middle class fop, basically.

There are better places to eat, with Indian, Thai, Japanese, Sardinian, Vietnamese and Turkish restaurants all jostling against each other. Admittedly some are better than others – quantity does not equal quality – but there is definitely more choice. And while I’m not a fan of over-gentrification*, I don’t believe that Crystal Palace has lost its original down-to-earth feel, and I am a huge advocate of having a range of choices for all.

In terms of food shopping, Crystal Palace residents have had a lot to put up with over the last decade. Small local groceries have struggled to survive and many disappeared. The large supermarket building has had a few motley tenants over time. After a grim run of several years from the Safeways chain (remember them?), where you always left feeling more depressed than when you entered, we had to endure Morrisons, which flavoured the space with a sort of Soviet-era gulag-style melancholy, with shelves half full and catatonic checkout staff. Amid floundering profits, Morrisons fled the premises and shut down (hah). Then after a period of no local supermarket whatsoever, Sainsbury’s arrived and has stayed. Which is better than a poke in the eye, because they at least appear to behave themselves better than Tesco’s. And the checkout staff seem pretty perky, even ebullient at times.

Outside of the supermarket experience, food shopping around the CP hood has now been dragged up-to-date – there was such a great need for independent outlets selling decent produce, and locals have been demanding it, ever since the sad demise of the Crystal Palace Park Farmers Market (stifled a few years back by idiotic council regulations). You’ll find fabulous bread and cakes at The Blackbird Bakery (my second home), a beautifully-stocked cheese and wine shop called Good Taste, Polish produce from Piast Delicatessen and superior coffee beans from the Bambino Coffeehouse. Even Crystal Palace and Gipsy Hill rail stations now have the wonderful Brown and Green cafes in them, so you can get a real pork pie and a smoothie on the way to work! (See photo at the top of the page of one of their glorious plates of Aussie Eggs, plus toast.)

But, to my mind, the most exciting foodie happening in recent times has been the birth of the brand new Crystal Palace Food Market which launched last week to huge acclaim. I visited amid a stonking rain shower on its first opening day and was super chuffed to see local produce on sale – some of which is grown in Crystal Palace itself by Patchwork Farm. Hordes of punters were queuing for everything, not least for the rather superior burgers that were being grilled. Annoyingly, my daughter was screaming her tiny lungs out like a sergeant major, preventing me from lingering very long, resulting in me getting flustered and leaving half my shopping behind!

I must go earlier next week because a lot of stalls had completely sold out. There is a strong emphasis on keeping the produce local, and you will find excellent cheeses, eggs, fruit and veg, a quality butcher and herbs to plant in your garden. The bread and cake stalls had long sold out, so I’ll be back next week elbowing shoppers out the way, like Mrs Brady Old Lady. Watch out.

Some photos (excuse the rain):

Excellent cheeses from Mootown – my friend bought an amazing goats cheese halloumi that had mint running through it, a-mazing: 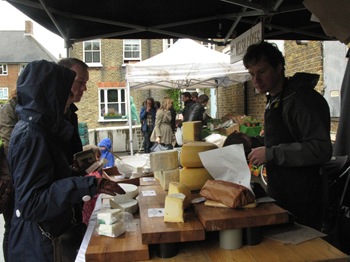 Biodynamic beef and lamb (and herbs to go with it) from Jacobs Ladder Farms: 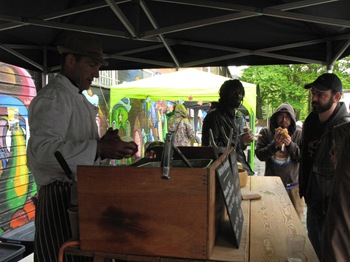 The fresh eggs I left behind, tchoh! (From Brambletye Farm)

Bee-friendly herbs and other plants for your garden: 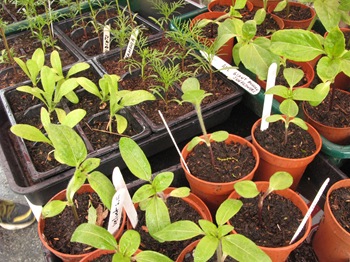 Tasty salads (including a yummy harrissa paste) from these ladies: 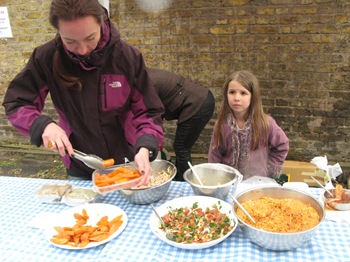 The full list of exciting producers who will be showing up each week at the market is here. Get thy backsides down here each and every Saturday, between 10am and 3pm!

*Don’t worry – CP hasn’t gone completely up its arse and turned into a wanky enclave of Boden-wearing middle class twats walking around with sourdoughs in their cloth shopping bags, BlackBerries beeping and pondering where to go for a Pinot Noir. There is still a high quota of loveable skint eccentrics, poets, weird beards – and, on the other end of the spectrum, crap fried chicken ‘cottages’ and cheque cashing/loan shops keeping it all balanced ;o)