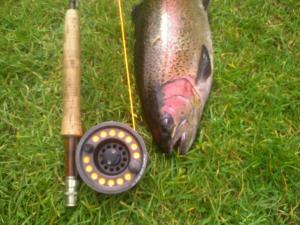 I’m a fairly urban girl with an impractical wardrobe. So I wasn’t quite sure how I’d fare out in the wild at my first ever fly fishing lesson. Seeing as I don’t possess many sensible outdoor clothes, my first task was dig something out of the wardrobe in muted colours so as not to frighten the fish. Not easily done, but that was the least of my worries…

I’d bought a fly fishing lesson as a birthday present for my husband and thought it’d be fun to tag along too. We’re both interested in where our food comes from, and what better thing to be doing than to hunt and catch your own tucker? We’ve watched so many episodes of River Cottage and looked on wistfully as Hugh Fearnley Whittingstall potters around the Dorset countryside in pastoral paradise with his dog. So we headed to a trout fishery in Hampshire, with its beautiful network of small lakes fringed with verdant greenery and overhanging trees, and met up with our tutor, stalwart trout fishing expert, J.

J meticulously demonstrated the whole process, from assembling the tackle, threading the flies and the art of casting off. In a word: it’s so fiddly! J seemed to think that ‘ladies’ might have the more delicate touch when it came to flinging the line into the water, but I disappointed him with my bloke-ish clumsy manoeuvres. I spent more time with the fly hook stuck in my hand or unravelling the line from overhanging trees than I did with the line actually in the water. J was very patient, but essentially I was not making much headway and had to spend ages standing on the bank casting my line over and over again. By midday, I was fading fast and was grateful when the three of us drove to the nearby local pub for lunch for a gutbusting meal of ham, egg and chips.

At which point, our tutor became rather morose. Not exactly gifted in the art of conversational topics outside of fly fishing (think along the lines of Steve Coogan’s depressive roadie Tommy in ‘Saxondale‘) he launched into a detailed rant about other sub-standard fly fishing instructors in the South of England and how he was intent on kicking up a stir with the regulatory authorities about ‘low standards of teaching’. Hmm. I nodded and ummmed and ahhed, and J continued apace, sensing this as encouragement. He motioned to a man (another instructor) sitting having lunch on the other side of the room and said in a loud voice: “He, at least, is one of the good guys.”

Righto. I soldiered on with my lunch and tried to change the subject. But no – by now, J was intent on extending his tirade to include the entire community of fly fishing teachers in the British Isles, and all the reasons why nobody in the country was as skilled as he was. Were we aware that no other fishing instructor in the UK could entertain the crowds at trade shows by hitting flour-filled balloons with a fishing line? Hmmm. I could feel my energy ebbing away, and was powerless to steer the conversation back to a less brain-deadening subject. One thing that struck me was that no matter what line of work you do, whether you’re stuck behind a PC in an office, working in a shop or, indeed, teaching people how to catch fish, the politics are all the same.

Thankfully we didn’t stay too long at the pub. Once back at the fishing lakes, J calmed down and we continued our efforts catch a fish. Big, glistening trout glided lazily past our bait and paid no attention to our lines whatsoever. It was deeply frustrating. We’d been outside since 9:30 that morning, and by 6:30pm we hadn’t had any luck. At which point, J (now thankfully mellow and contentedly puffing away on a pipe) sensed our disappointment and skillfully caught a pair of massive trout for us to take home. He let each of us reel them in to the bank and net them. He handed me ‘The Priest’: a heavy brass baton which which to kill the trout, and I dutifully cobbled it over the head above the eyes with several swift blows. I was expecting the trout to flip about all over the place when I hauled it onto the bank, but instead it lay still as though resigned to what came next. This city girl felt no qualms whatsoever about the act of killing, either! I wondered if J ever got carried away hitting fish (or indeed people) over the head…

And this is how our good trout friend ended up: baked in the oven in a foil parcel with its belly stuffed with lemon, garlic, celery.

We converted the cooked leftovers into potted trout, using Hugh Fearnley Whittingstall’s potted mackerel recipe from his ‘Fish’ book, where you mix up flaked fish with spices, chopped herbs and plenty of melted butter, ‘potting’ the mixture in a ramekin with a butter seal. Delicious on toast!