50 Shades of Grey – and proper muesli

I just watched ‘50 Shades of Grey’ in the cinema with my baby son in my lap. No, I’m not some kind of deranged freak and I do believe my son is unscarred. He actually fell asleep for most of it. In my opinion, the film is about as racy as an advert for Gillette shaving cream. Strangely there isn’t actually that much sex in it, given that the book by E L James is an absolutely torrid bonk-fest. And the sex that you do see is really rather tame – well, tame when you consider that the ‘worst’ thing that the lead male does to the female is whip her bottom with a leather strap. I was expecting much darker pursuits – gimp suits, cages, the works. As I queued to buy my ticket I heard one mum exclaim to her baby (for it was a mum and baby screening) ‘Look Arthur, we’re going to see an erotic film!’ I can imagine that she left the auditorium rather underwhelmed. Another mum I chatted to as the credits rolled said ‘yeah, basically pretty boring.’

I hadn’t planned specifically to go and see a raunchy film with my baby. The idea of it did make me feel a little weird, but the only other film on offer at the time was ‘Shaun the Sheep’. I rely on my weekly cinema outings to take me as FAR AWAY from the land of childcare as possible, so it was a no brainer to opt for ‘50 Shades’. Seeing as my son is very young and can get his kicks just staring at a ball for an hour, I figured it wouldn’t really matter that there would be lots of bonking on screen. He did mainly just stare and drool at the ‘Exit’ light over my shoulder while various buttocks jigged up and down on screen.

I had actually watched the excellent crime thriller ‘The Fall’ recently and was rather impressed by Jamie Dornan (the male lead) portraying an intensely beardy and twisted serial killer, and was intrigued to see what he’d be like in this. Let’s just say I preferred the scary psycho murderer character, rather than the smooth-chinned suave businessman (with amusing bouffant hair and dreadful leather cropped coats) in ‘50 Shades’. Maybe that says more about me than I care to admit, ha!

There’s a scene in the film where the female lead (Anastasia Steele) is reading through the clauses of her ‘bondage contract’ to suave businessman Christian Grey. It states that she, the ‘submissive’, must only eat and drink from a range of pre-selected foods and beverages selected by ‘the dominant’ to ensure that she retains her strength – presumably from all the hardcore bondage that they are going to do. At the end of the film, I thought ‘Yeah right.’ Most of the screen time was made up of Christian whisking Anastasia off in his private plane, turning up at her workplace (a hardware store) and asking for cable ties (titter), pulling up outside her house in a variety of cheesy sports cars, or staring moodily out of his penthouse windows while playing a grand piano. I found a lot of this incredibly amusing – some of the dialogue was plank-like (“Laters, baby,” says Christian to Anastasia on several occasions) and I kept wondering where Christian got his furniture from. So distracting, those hard modern sofas and cabinets! And what brand was his expensive coffee machine? Even his bondage dungeon was neatly polished and tidy, as though styled by Wallpaper* magazine. 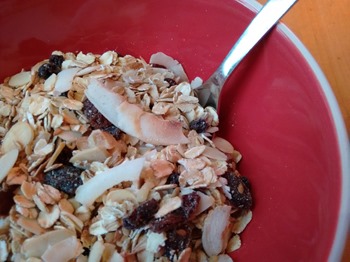 A trick to making a super tasty muesli is to toast some of the ingredients for a few minutes first in a frying pan, which will really bring out flavours. Seeds, for example, taste pretty dull on their own, but toast them for a few minutes and they take on a lovely roasted flavour. Same goes for your coconut strips and flaked almonds. Watch the toasting process closely to avoid burning anything – you want just a waft of toasty-ness coming from the pan. It might seem like a pfaff, but then, to be honest, there’s not much point making your own muesli if it isn’t gonna taste amazing and better than the shop-bought stuff…

When you have finished toasting your coconut strips, flaked almonds and seeds, just chuck them in a large mixing bowl and let them cool down. Using scissors, chop up the larger dried fruits (eg figs, apricots and dates) into bite-sized chunks. Chop up the whole nuts (pecans, walnuts) roughly with a large, sharp knife. Add to the rest.

Then add the same quantity of oats, and mix everything together well. Stores for several weeks in an airtight container. There’s your muesli, all done!  All very nice and sensible.

This post is dedicated to I and Z (you know who you are, ladies!) xx