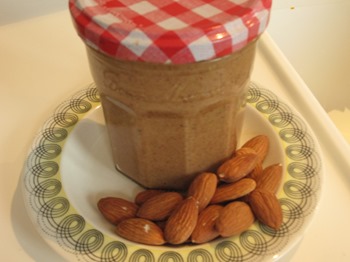 I snuck off to the cinema on my own last week (shhhhh! was meant to be working) to catch an early afternoon matinee. That, to me, is total bliss. I’ve been going to the cinema on my own for years. I saw the new Woody Allen film, Blue Jasmine, which I loved. I used to be a huge fan of his, but his last few films (eg Midnight in Paris) have made me want to claw my own eyes out, so this was a welcome return to form. Just the sight of lead actress Cate Blanchett’s face in all her phases of derangement are worth it alone. Yup – just me, a coffee, some cake, and an auditorium filled with pensioners cashing in on Brixton Ritzy’s Cinema’s free tea and biscuit deal. I almost wished I was a senior citizen for a moment.

Anyway, I am SO excited. I have discovered how to make my own almond butter at home (I prefer it to peanut), and it’s dead cheap too. Honestly, you should see how much of the stuff I eat. I have been polishing off jars of Meridian almond butter to the tune of about one a week, and it costs £2.39 for a tiny pot! No offence, Meridian, but seeing how much I pack away, I have had to find a cheaper way to sustain my addiction. And this easy method will rock your world!

Basically, I had NO idea that all you had to do was to blitz roasted whole almonds in a food processor for a few minutes, with just a sprinkling of salt. That’s IT. No nasty rainforest-destroying palm oil, no sugar, no thickeners. Makes that ole’ jar of Sun Pat with all its extra ingredients seem a bit gross. And the best bit? Because you’re making it in the food processor, it takes just five minutes to blitz, and if you have a dishwasher you can just shove all of the dirty kit in there afterwards. (I opted for using our Magimix food processor over the Champion juicer we have – it can also make nut butters, but is a massive pain in the arse to handwash). Job done!

My guilty pleasure: craggy toasted bread sprinkled with olive oil, spread with Marmite and then thickly topped with almond butter. To be accompanied with a cup of Earl Grey tea. At any time of day or night!

Plain almonds, skin on, 370g – if you can’t be bothered to use scales, tip enough nuts in to fill the jar, then repeat. This will give you roughly enough nut butter to fill the jar, as the amount collapses down when you blend it.
A generous pinch of sea salt.

First, roast your almonds spread out in an oven dish on a bit of greaseproof paper, at 180C for 15 minutes. Halfway through roasting, give them a bit of a stir around to ensure that they roast evenly.

When they are still warm, pop them in your food processor. Use the large metal blade.

Put the blender on and leave it – the almonds will go through several stages; first, they’ll be ground up into small particles: 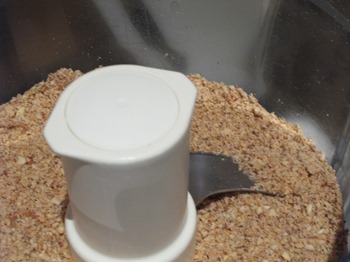 Then they’ll clump together in dry lumps:

The lumps will come together to make a rough paste:

Then suddenly the paste will go smooth and glossy:

If the almonds are blended warm from the oven, the whole process will take less than five minutes. FIVE MINUTES. WOW.

Spoon into a clean jar and tightly close with the lid. Some people put their nut butters in the fridge. Mine never sticks around for long enough to warrant the bother!

I buy my almonds in bulk from here, and using their price for a 1kg bag of whole nuts (£6.75) I worked out that my jar of almond butter cost £2.49 for 370ml. The Meridian jar is only 170ml, which is less than half the size, and is almost the same price. Even with my bad grasp of maths I know that I am WINNING! This homemade version is basically more than 50% cheaper, friends. And it tastes amazing, so much nicer. Hah.

You can use any nuts, by the way – peanut, pecan, almond, walnut. Although the idea of Brazil nut butter makes me feel urrrrrrgh. I hate Brazils – they taste of old musty cupboards and wax.

Anyone out there been making nut butters for years? Am I a massive latecomer to this whole thing? Are y’all rolling your eyes?