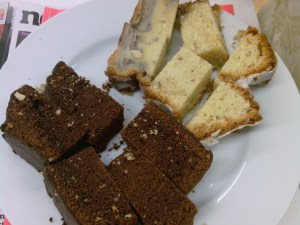 I am quite often inspired to have a foodie rant. So here goes my first proper ‘harrumph’ on the blog.

The cake above is Exhibit A – a selection of slices of banana and chocolate cake purchased from Del Aziz in Bermondsey Square, London. Nothing wrong with the cakes as such, but the lady who cut the slices in front of me first of all cut a 1cm slice from the cake which she put to one side before cutting a bigger wedge to sell to me. “What do you do with the small bit?” I asked. “Oh, we throw it away,” she replied nonchalantly. Whaaaat? That means that at least a whole quarter of each cake they make goes directly in the bin – a nonsensical waste of perfectly edible food. They must be insane. What is meant to be a gesture of largesse totally fails to impress. How can you throw cakes away when there are people going hungry? Time will tell whether their profits go into the bin as well…

And Exhibit B? Behold the sorry sandwich below: 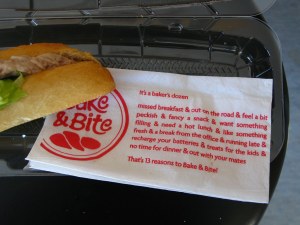 This vile example of a tuna mayonnaise ‘baguette’ was purchased a few days ago from ‘Bake & Bite’ situated in the car park of the Portsmouth Isle of Wight ferry dock. Ok, I should have known that I wasn’t exactly in the right place for a gourmet snack, but this sandwich was what I felt would be the ‘safest’ option from a very unappetising array of leaden, greasy snacks on display at the counter. However, as soon as I bit into it, it was like receiving a wet sludgy slap to the face. The bread was so damp it felt as though it had been dunked into a bucket of water. The salad inside was limp and forlorn; the tuna had been whipped into a greyish gloop with acidic mayonnaise (no doubt piped out of an industrial vat somewhere). The whole thing was totally disgusting and – as much as I HATE wasting food – I had to lob it into the bin. Why is it so impossible to get a simple nutritious snack outside of big towns and cities in the UK? Apparently in countries like Italy you can eat wonderful homecooked food at motorway service station cafes for next to tuppence. In France I’ve had many a delicious meal in supermarket cafes. It’s not that difficult to make tasty, simple food. But we’ve clearly got a long way to go in this country if even the simplest of sandwiches proves too challenging. Bah!